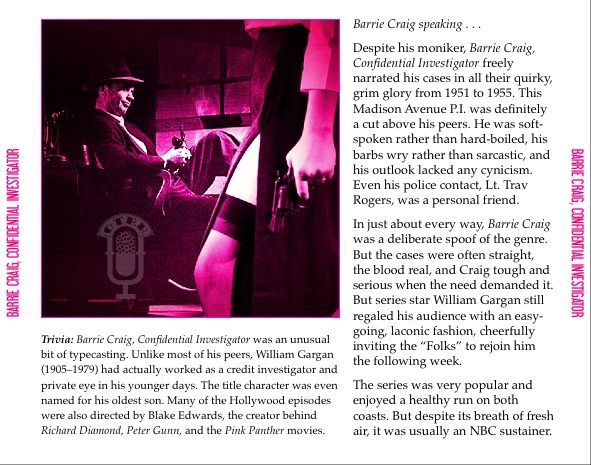 William Gargan, who also played the better known television (and radio) detective Martin Kane, was the voice of New York eye Barrie Craig while Ralph Bell portrayed his associate, Lt. Travis Rogers. Craig's office was on Madison Avenue and his adventures were fairly standard PI fare. He worked alone, solved cases efficiently, and feared no man. As the promos went, he was "your man when you can't go to the cops. Confidentiality a specialty."

This series has been produced with various spellings of the primary character name. Barrie Craig, Confidential Investigator is one of the few detective radio series that had separate versions of it broadcast from both coasts. Even the spelling changed over the years. It was first "Barry Crane" and then "Barrie Craig". NBC produced it in New York from 1951 to 1954 and then moved it to Hollywood where it aired from 1954 to 1955. It attracted only occasional sponsors so it was usually a sustainer.

Reviewer: The True Brain Pimp - favoritefavoritefavoritefavoritefavorite - August 14, 2020
Subject: Is "Mellow-boiled" a thing yet?
He's got no gimmick. The closest thing to a sidekick is an aged elevator man. Comic relief is provided by Willie of The Lunch wagon. He hardly ever gets the girl. And he only gets an edge when its cutting time. Barry Craig is similiar to Richard Diamond in that they were kings of screw-boiled" noir of the early fifties. Just about the best re-listen series in the detective genre. Does ANYBODY know the name of the theme song?
Reviewer: Den NC USA - favoritefavoritefavoritefavoritefavorite - May 28, 2020
Subject: More of a loner than Sam Spade or Frank Race, but he's solid.
If you're just finding out about all these great shows on INTERNET ARCHIVE, this is a worthy listen.
If you want a good example, try #12 Death of an Investigator.
It's a tale of New York City in the winter, getting over to Staten Island, even, and though you might want to hear it twice to follow the plot, it's got some great characters (in the sense of realism) and gives a good sense of what Barrie Craig was all about.
As other fans have said, well-produced, good scripts and although the music is more repititious than Sam Spade's, it never gets in the way of the action.
Enjoy, and watch yourself. NYC is a tough place.

- Old Time Radio Researchers Group
Reviewer: MPOEye - favorite - September 6, 2019
Subject: Godawful!
Nothing but talking throughout, with virtually no action, and minimal sound effects and music.
Reviewer: baby ruth - favoritefavoritefavoritefavoritefavorite - July 23, 2017
Subject: Just the right mix
This detective series is just right: well-paced, well-acted, interesting without today's brutality, spiced ever-so-slightly with humor. I'm so glad I came upon it.
Reviewer: jobtrotter - favoritefavoritefavoritefavoritefavorite - December 13, 2016
Subject: Love this detective show!
The dialogue written for Barrie is really good. I laughed out loud at some of his snappy lines.
Reviewer: harron68 - - February 24, 2016
Subject: TOO CONFIDENTIAL
Barry Craig slipped under the radar of old time radio. Rarely heard, this pretty well plotted and acted series deserves better now that it's available. If William Gargan isn't the big name actor as with some shows and hasn't a gimmick, it doesn't tarnish what is evident in listening to these clear well produced programs. His movie career was extensive, and earned him an Oscar nom. After losing his larynx to cancer from smoking, he did work to fight smoking and cancer. In all, this series reflects professional work and good pacing. 3.5 stars
Reviewer: Max Reiner - favoritefavoritefavoritefavorite - July 29, 2012
Subject: The MUTEL Cues in Barrie Craig
This series is the only one I know of that makes full use of the MUTEL production library, which is a favorite of mine. There are some real gems of cues. I put the show on a bedtime and it gives me the most amazing dreams. The audio levels are quite consistent compared to other Archive shows. The only objection I have is in the original mix where the micing is muffled. Why were the highs attenuated. I thought it was in the transfer. But that can't be the case because the music cues come through very bright.